The day is also recognized by the UNESCO in 1999 as “World Heritage Day”, and Thailand where the permanent location of the World Fellowship of Buddhists is located  was chosen to host celebrating event for the day.  Via chiangraitimes.com

They brought flowers while senior monks rode a float in the form of a vessel carrying the relic of the Buddha.

Along the route of the procession, led by the general chairperson of the Indonesian Buddhist Association (Walubi), Siti Hartati Murdaya, the monks splashed the water of blessings while other participants spread red and rose flower petals.

The weather in the afternoon was very bright and so many people living around the neighborhood as well as domestic and foreign tourists came to watch the procession along the route.

Visitors, however, had been advised to maintain peace and order to respect Buddhists who were conducting prayers and other religious rites. 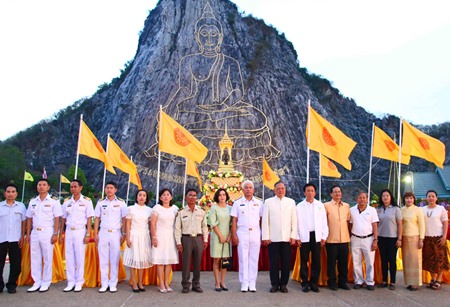 Marking the triple occasion of the birth of Buddha, the day of his enlightenment, and his ascension to Nirvana, Visakha Bucha Day is one of the three holiest days on the Buddhist calendar and previously was designated by USESCO as “World Peace Day.” The educational, scientific and cultural organization’s proclamation cited Buddhism’s teaching of humanity, mercy and tolerance as the reasons for the designation.

Believers began showing up to Khao Saotong Thong, Sutthawat, Nong Yai, Boonkanjanaram, Thamsamakee, Chaimongkol, Nong Aor and other temples early, offering morning alms to monks to make merit. Many stayed throughout the day, capping the May 20 holiday with the traditional “wien tien” procession ceremonies in the evening.

In Pattaya, bars were closed, frustrating tourists. Instead, people went to places like Nong Aor Temple for the “wien tien” procession led by Abbot Phuchitkisaro. Worshippers made merit, meditated, studied dharma, and listened to monks telling of the gratitude, intellect and purity of Lord Gautama Buddha.